If you’re looking for more technical details on Wireless Technology, you’ve come to the right section.
Fixed wireless broadband is a type of high-speed Internet access where connections to service providers use radio signals rather than cables. Not to be confused with either satellite Internet or Wi-Fi hotspots, fixed wireless is a type of broadband that utilizes mounted antennas pointed at radio transmission towers.
Parolink.net delivers services using Fixed Wireless. Fixed Wireless uses directional, narrow beam, point-to-point (PTP) antennas and radios that guarantee network access is available only to the specific customer who owns the communications link. Each radio at a customer location corresponds to a radio at our tower site. In order to operate, these radios must be pointed directly at each other within the centre of the beam path with a clear, unobstructed line-of-sight. The physical configuration and the technology design guard the integrity of customer data. Fixed Wireless technology communicates over-the-air using a non-standard protocol that is designed to maintain security and optimize network performance and availability. Each Wireless Equipment Manufacturer uses a proprietary, over-the-air protocol that makes it very difficult for any device to intercept and interpret data transmitted over the wireless link or to alter the protocol. 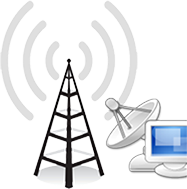 Our equipment is engineered and installed to withstand the worst weather conditions within a specific region. This includes rain, snow, fog, wind, and temperature. In fact, our equipment is tested and certified to operate at temperatures ranging from -40 to +50 degrees Celsius.

The point-to-point signal transmissions occur through the air over a terrestrial microwave platform rather than through copper or optical fiber; therefore, fixed wireless does not require satellite feeds or local telephone service.

The advantages of fixed wireless include the ability to connect with users in remote areas without the need for laying new cables and the capacity for broad bandwidth that is not impeded by cable capacities.

-Unlike satellite Internet systems that communicate into outer space, fixed wireless dishes and radios communicate with towers in close proximity 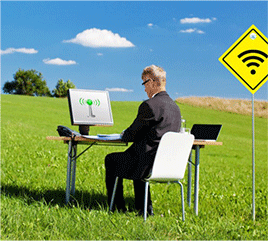 While DSL and Cable Internet Providers struggle to deliver on the promise of broadband
internet access, Parolink.net wireless high-speed continues to impress our hundreds
of customers with fantastic customer service and unparalleled Business Class Internet Access.

Wireless ISP’s are coming of age. www.Parolink.net is a viable alternative to your current
Telco data services. We look forward to a long and successful relationship as your chosen local ISP.